Since the dawn of the digital age, decision-making in finance, employment, politics, health and human services has undergone revolutionary change. Today, automated systems—rather than humans—control which neighborhoods get policed, which families attain needed resources, and who is investigated for fraud. While we all live under this new regime of data, the most invasive and punitive systems are aimed at the poor.

Automating Inequality systematically investigates the impacts of data mining, policy algorithms, and predictive risk models on poor and working-class people in America. The book is full of heart-wrenching and eye-opening stories, from a woman in Indiana whose benefits are literally cut off as she lays dying to a family in Pennsylvania in daily fear of losing their daughter because they fit a certain statistical profile.

This powerful investigative look at data-based discrimination could not be more timely. 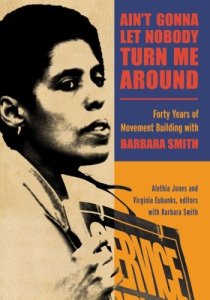 Ain’t Gonna Let Nobody Turn Me Around:
Forty Years of Movement Building with Barbara Smith

With Alethia Jones and Barbara Smith
Buy it now!

As an organizer, writer, publisher, scholar-activist, and elected official, Barbara Smith has played key roles in multiple social justice movements, including Civil Rights, feminism, lesbian and gay liberation, anti-racism, and Black feminism. Her four decades of grassroots activism forged collaborations that introduced the idea that oppression must be fought on a variety of fronts simultaneously, including gender, race, class, and sexuality. By combining hard-to-find historical documents with new unpublished interviews with fellow activists, this book uncovers the deep roots of today’s “identity politics” and “intersectionality” and serves as an essential primer for practicing solidarity and resistance.

“Barbara Smith is one of the grand pioneering and prophetic voices of our time. Her truth still hurts and heals!”— Cornel West

“…Barbara Smith is everything. So is this book … [it] challenges us all to dig deeper in our work and never stop pursuing actual, authentic liberation.” — Autostraddle

“…a massive and important work … This will be an important book for students of the Civil Rights movement, but also for those who want to know what it takes to build movements, and movements that last.” — San Francisco Book Review 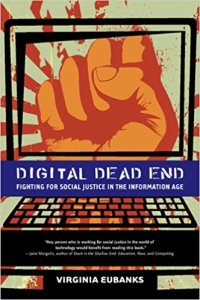 The idea that technology will pave the road to prosperity has been promoted through both boom and bust. Today we are told that universal broadband access, high-tech jobs, and cutting-edge science will pull us out of our current economic downturn and move us toward social and economic equality. InDigital Dead End, Virginia Eubanks argues that to believe this is to engage in a kind of magical thinking: a technological utopia will come about simply because we want it to. This vision of the miraculous power of high-tech development is driven by flawed assumptions about race, class, and gender. The realities of the information age are more complicated, particularly for poor and working-class women and families. For them, information technology can be both a tool of liberation and a means of oppression.

But despite the inequities of the high-tech global economy, optimism and innovation flourished when Eubanks worked with a community of resourceful women living at her local YWCA. Eubanks describes a new approach to creating a broadly inclusive and empowering “technology for people,” popular technology, which entails shifting the focus from teaching technical skill to nurturing critical technological citizenship, building resources for learning, and fostering social movement.

“If we’re to move forward as a society we’ll need to abandon many of the platitudes and utopian musings that characterize computerization and actually start doing the work that needs doing. This is what Virginia Eubanks lays out in Digital Dead End. Is she the Jane Addams of the digital age?”
—Douglas Schuler, author of Reinventing Technology, Rediscovering Community