This winter finds me wrapped in a scarf of Dr. Who-ish proportions and immersed in archival research for my next book, The Digital Poorhouse: Computers, Public Services and American Citizenship. This month, I am looking into the design and implementation of the Welfare Management System (WMS) in New York State in the 1970s and 80s. This system is still used to manage case files and calculate eligibility for a wide variety of public assistance programs — including Temporary Aid to Needy Families (TANF), housing assistance, the Supplemental Nutrition Assistance Program (SNAP, or Foodstamps), and many more — for hundreds of thousands of families in New York.

While digging through the files at the wonderful New York State Library and Archives, I came across a 1973 Village Voice article that claims governmental malfeasance in rewarding a contract to computerize welfare and Medicaid, and introduces a surprising to new player in this fascinating story: H. Ross Perot.

Mr. Perot is most famous for his third party, self-funded runs for the presidency of the United States in 1992 and 1996, on a platform that included eliminating the Federal deficit in five years, reducing the size of government, cutting government spending on the military and entitlement programs, and instituting electronic town halls. Turns out, through his companies Electronic Data Systems (EDS) and Perot Systems, he made a significant portion of his immense fortune–he is the 101st richest person in the United States, according to Fortune Magazine–by computerizing public assistance and government healthcare programs.

[There is a] scandal shaping up over the awarding of a $30 million welfare and Medicaid computer contract, the largest contract of its kind ever awarded by a state…Governor Rockefeller personally intervened on behalf of computer tycoon H. Ross Perot in order to keep him in contention for a contract to automate and administer the state’s $3.7 billion welfare and Medicaid operation. Originally, nine firms had submitted bids for a $40,000 contract to study current welfare and Medicaid payment systems around the state and propose an automated computerized model, which the companies would then run themslves. Five firms were selected, based on their presentations.  H. Ross Perot’s firm, Electronic Data Systems, was not one of the five….Perot immediately contacted the Governor, and on February 9 the Governor, Perot, and Social Services Commissioner Abe Lavine met together to discuss the matter. As a result of that meeting, Perot’s firm was reinstated in the bidding. The number of companies eventually awarded the $40,000 was cut from five to three and Perot’s firm was one of those selected.

Tracy’s article goes on to discuss some of the trouble that EDS, which had been cashing in on government contracts to automate the governments social assistance and medical programs since 1966, had already gotten into:

Ross Perot’s track record had got to be one of the muddiest around. For example, Perot’s $20 million annual contract with the State of California for running that state’s Medicare and Medi-Cal [systems] has been under investigation for the last two years…It has been charged that EDS at one point was running a 13 per cent error rate in its determination of reasonable charges…[In addition, a series of legislative hearings into federal health programs between 1970 and 1972 found]: 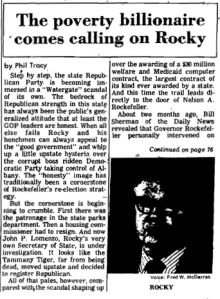 The only major difference? In the 1970s, EDS cleared those Medicaid cases by indiscriminately approving them. In 2010, IBM did it by unjustly denying poor and working people life-saving assistance, both in individual cases and in bulk.

As reported by Mary Beth Schneider and Bill Ruthhart in the May 14, 2010 issue of the Indianapolis Star, one woman was cut off from Medicaid for missing her appointment with her caseworker — because she was hospitalized with terminal cancer. Welfare benefits were denied to a deaf deaf person — because she couldn’t do a phone interview. And Indiana charged in their lawsuit that when “IBM Coalition workers” — the call center employees who replaced Indiana’s frontline caseworkers — got behind in processing applications, “they would often recommend denial of an application to make their timeliness numbers look better, but then would tell the applicant to appeal the decision.”

We always hear about fraud in the welfare and Medicare/Medicaid systems, and low-income mothers face sanction, deprivation and jail sentences if they are caught fudging the numbers. So why has no one called H. Ross Perot and IBM CEO Virginia M. Rometty welfare cheats?